Pastorate planning has looked very different over the past year, especially in the last six months! Find out what the 2019 cohort has been up to and how they have successfully navigated pastorate planning in a pandemic. Also in the newsletter you will find information about nominating your pastorate for the 2020 cohort, testimony from those who have taken up pastorate planning about the positive effect it has had, and ideas for how to get your pastorate headed on a path of missionary discipleship even if you have not been activated for planning. 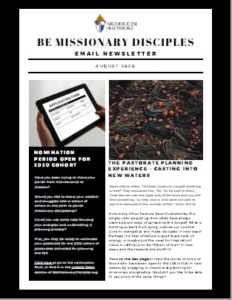